We stood there on the tallest point overlooking a historic town, an historic river. Clouds puffed in the sky and I snapped pictures of the scene before me. Rolling hills, a picturesque river, quaint buildings, and boats on the water. All was at peace that warm summer day. 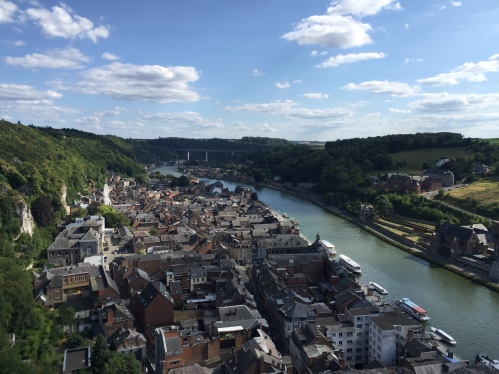 That tallest point? A fortress more than 500 years old. That town? Passed back and forth between warring kingdoms for most of its existence.

The people who faced each other across the river were not always part of the same kingdom either. The vacation boats on the river now used to be vessels of war, of conquering. Hence, the need for a fortress to fight off invaders.

Surrender is a word that comes up frequently in my spiritual life as a Christian. Surrender. Surrender anything that stands between me and the Lord. Surrender my way for His.

Recently, I’ve sensed that my romantic view of the word (picture hands raised and a white bird flying up to the blue sky while sunlight shines down ready to accept the glowing bird), fails to grasp the brutal reality that surrender is more a battle front term.

Back track a little and before surrender comes division and a battle of two or more opposing forces. Similarly in my own life, a battle usually rages until I face that I’m losing, big time. My way, my army, my kingdom is weaker than the one I ultimately fight. God.

Then, there’s an honest reckoning, a realization that I will not win. I cannot win. I will be defeated. At this point, I face a choice. I can continue fighting a losing battle out of pride or I can make some tough calls.

A Captive: I lose the battle but think I should have won it. I nurse the idea that I could have won it if I’d just done a little something here differently or fought a little harder there. My allegiance has not changed. I’m still fighting. Life is full of strife as I live in rebellion to the King, constantly seeking a way of escape.

A Deserter: I turn and run from the battle. I live to fight another day thinking I can still win. I live on the run not knowing when I will need to turn and fight again. Life is about escape and hiding from the more powerful and ever pursuing King.

A Defector: I change sides because I reckon that the other side is better, more worthy of allegiance. Now I use my weapons for another King and His kingdom. I live at peace in the protection of the King’s fortress, guarded by Him and sent to do His work. My former identity as an enemy combatant is known, yet I am not sidelined out of suspicion or fear. I’m fully accepted.

The choice to surrender now starts sounding more like a laying down of arms than a moment with a dove.

Sometimes I figure out things fast and lay down my weapons before serious blood is shed. But there are times when I don’t and I come in wounded to my own surrender, a little beat up in the battle. A bit chagrined that I misjudged my allegiances so poorly.

This week it was about a kid’s homework, surrendering a better grade to preserve our relationship. A few weeks ago it was about choosing to happily do a task I didn’t fully want to do.

Every day it is choosing to step out and follow Jesus, rather than stay on my own path, fighting for my own way.