For 40 days a giant came out and challenged the army. 80 times they heard the taunt. 80 times their king failed to answer. Talk about a morale buster.

One. They’re in a valley. A low place, not the high ground I understand as being preferred in battle.

Two. There is a real giant with huge weapons ready to battle.

Three. The king has no answer. The king is not leading. The king sees no soldier volunteering and he is not choosing the option to volun-tell one to fight the battle. The king seems afraid, overwhelmed, and desperate.

Then comes the runt of a family. A shepherd boy on an errand.

As my pastor read through the passage in 1 Samuel, my mind slanted to a new realization.

David came into the battle as an observer. What must he expect to see as he got to the top of the hills surrounding the battle? Probably a battle!

But, there was no battle. I picture him walking through the camp, observing, confused, trying to figure out what in the world is going on. The men were waiting, afraid, demoralized. Its one thing for this to go on a day or two. But 40? That will do something to a soul.

David came in from the broad fields filled with sheep, daily trusting God to deliver him and the sheep. Daily seeing God do just that. He came in with a fresh perspective and it was not welcome.

There’s been times in my life where I’ve felt like David’s brothers. 40 days in the valley being taunted. Scared and stuck. Then, someone comes into my life, looks around and says something to the effect of don’t be discouraged by this, fight! God can win this one.

Its startling. It usually grates a little. But, when I’ve let it sink in, its moved me out of the valley.

By the way, does anyone else think its pretty crazy that Saul let David go fight Goliath? I mean, he put the whole fate of the nation on the shoulders of a boy he didn’t know who couldn’t even wear his suit of armor. 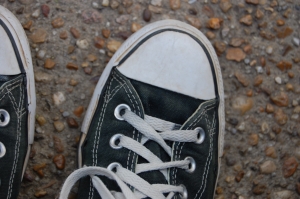 Ah, that sounds like a familiar story line in the Bible.

My gut check in this story is looking at how I respond to events.

Am I in a valley and in need of an outside perspective, that of a warrior who sees the battle as winnable?

Or, am I acting like an older brother, neglecting the input of the younger because of age, rivalry, or jealousy? Yikes, I hope not, but I won’t rule it out. I know myself enough to know it wouldn’t be the first time.

Or, am I like the king in some way, not leading, allowing the troops to get beat down because I won’t believe God is capable of winning?

Or, what if there’s a time where I’m the outside perspective, seeing things differently, more clearly and needing to speak up even at the risk of annoying and provoking those that are understandably beat down?

A lot of food for thought in this story. The Bible is old, but it never really gets old, does it?